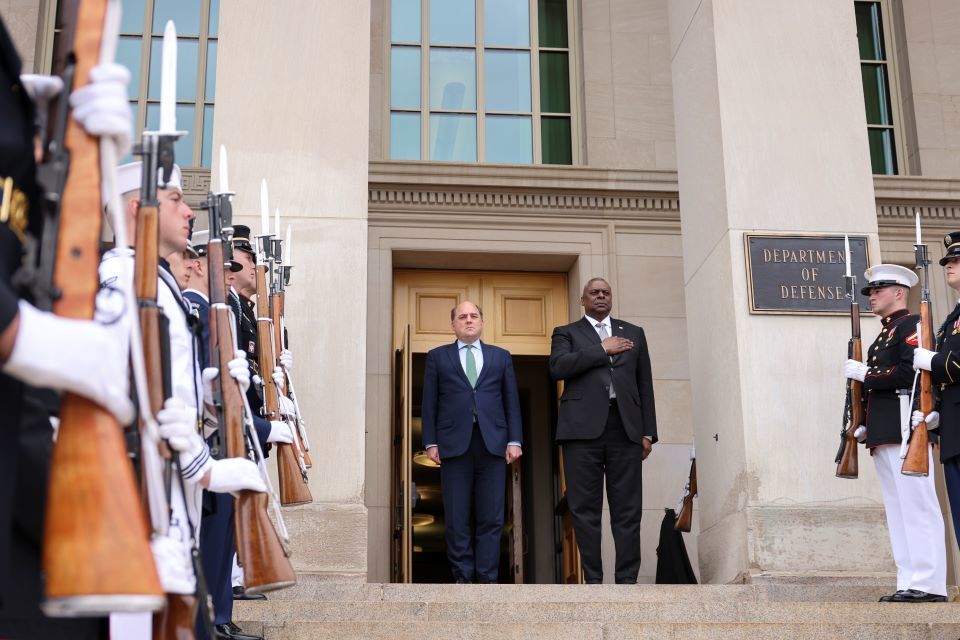 Ben Wallace met his US counterpart, Secretary of Defense Lloyd Austin, at the Pentagon in Washington DC on Wednesday. They spoke about joint UK-US efforts to support Ukraine, including through supply of military aid and the coordination and delivery of donations from other partners.

They also discussed the ongoing drive to ensure NATO can deter and defend against any Russian aggression towards allies in Eastern Europe and looked ahead to the upcoming NATO Summit in Madrid in June.

It was extremely good to meet again with my good friend and NATO partner, Lloyd Austin.

The US and UK relationship is as strong as ever. We will continue to work with unity and resolve to provide Ukraine with what it needs to defend itself against Russia’s unprovoked invasion.

We discussed the next steps to provide defensive support for Ukraine, as well as AUKUS, the future of NATO, and other aspects of our shared security.

The UK and US have been at the forefront of international efforts to support the Ukrainian government and armed forces as they defend themselves from the unprovoked attack by Putin’s forces. The US has supplied around £3 billion of military aid to Ukraine since the war began, while the UK has just confirmed £1.3 billion in extra funding for military operations and aid to the country – on top of the existing £1.5 billion of UK support including humanitarian aid and grants, as well as military kit such as armoured vehicles, anti-tank missiles and air defence systems.

Both countries have also taken leading roles in organising international donations of military equipment. The Defence Secretary has hosted two international donor conferences to coordinate military aid from 35 partner nations, while RAF aircraft have moved thousands of tonnes of military assistance from donors around the world to Ukraine.

In the three-day visit to the US, the Defence Secretary carried out a series of engagements with senior politicians and defence and intelligence officials, all aimed at reinforcing this close trans-Atlantic co-operation in response to Russia’s invasion of Ukraine, as well as discussing wider defence issues.

Engagements included bilateral meetings with Commander of US Cyber Command and Director of the National Security Agency General Paul M. Nakasone, and Chairman of the Joint Chiefs of Staff General Mark Milley, as well as meetings at the Central Intelligence Agency headquarters in Langley and the Defence Intelligence Agency headquarters in Washington.

He also represented the UK at the Munich Leaders Meeting, discussing pressing security challenges with allies and partners on both sides of the Atlantic.