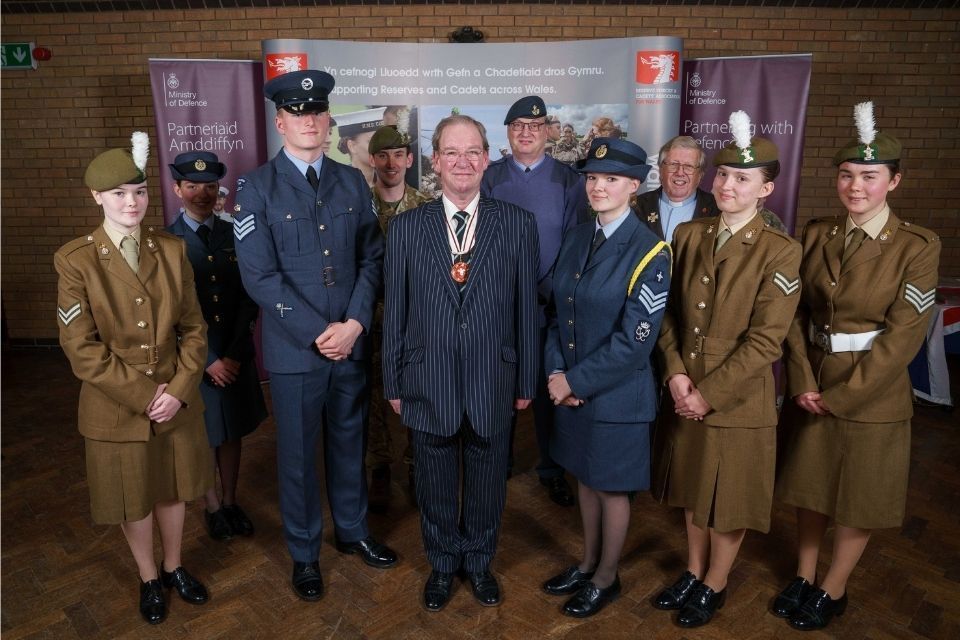 The role which lasts for one year includes attendance with the Lord-Lieutenant at a number of official engagements such as Remembrance events, Royal visits and parades.

Around 100 people attended the event on 24 March, to mark the new appointments which will see the cadets represent their peers and respective organisations at local and national level occasions.

The five will follow in the footsteps of Cadet Company Sergeant Major Ethan Thompson of Clwyd and Gwynedd ACF; Cadet Warrant Officer Oliver Heard-Edwards of No 2 Welsh Wing RAF Air Cadets and Cadet Warrant Officer Harriet Gaskin of St Brigid’s School Combined Cadet Force, who were all awarded the Lord-Lieutenant’s Certificate and Badge for being the 2021 representatives.

At the ceremony which recognised high achievers from the reserves and cadet communities, three adults were recognised for their outstanding service and devotion to duty and awarded the Lord-Lieutenant’s Certificate of Merit.

There are nearly 5,000 cadets in Wales who gain skills and qualifications through working with local communities, charities and taking part in a variety of practical activities. The cadet syllabus is delivered by 1,500 volunteering adult Instructors and civilian assistants, who give up their spare time on weeknights and weekends.

The virtual awards event was organised by the Reserve Forces’ and Cadets’ Association (RFCA) for Wales – an organisation that has supported the Armed Forces for over 100 years.