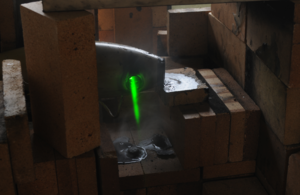 Laser development is a next-generation technology that could revolutionise the battlefield and reduce the loss of life and equipment.

A route into laser physics

I was doing a degree in Applied Physics, which included a year in industry at the Rutherford Appleton Laboratory. I worked with large and dangerous amounts of Krypton Fluoride on a laser system called ‘Titania’ for Inertial Confinement Fusion research, which is terra-watt peak powers in very short pulse duration.

My job wasn’t glamorous in the slightest, and I understood next to nothing – but I found it all very fascinating. It was then I decided to change my degree to Optoelectronic Engineering (‘Laser Physics’) in my final year.

For my final year project I built a laser, which led to me being accepted on the PhD programme at the University of Southampton’s Optoelectronics Research Centre. After working as a research fellow for a couple of years I eventually ended up getting a job in industry building optical fibre lasers, but it was working in defence that really interested me – and that’s when I came to Dstl.

Dstl started the building and specification of lasers for air survivability, such as laser jamming of optically guided threats, with small inroads into the realms of laser protection and threat warning. While working at Dstl, Dr Kendall had the opportunity to help develop a basic Laser Directed Energy Weapon (LDEW) capability at the Porton Down electro-optic facility.

Dr Kendall now works within the energy weapons team, spreading his work between laboratory, office and home. He also leads all laser range activity, as the only Trials Conducting Officer with a licence to run laser trial at Dstl Porton Down.

As well as his work on the range, Dr Kendall is the Lead Laser Physicist for the Laser Directed Energy Weapon (DEW) Programme, offering advice on technology development and experimental trials activities, with some involvement in laser safety.

The best job in Defence science?

I get to push the boundaries of what is physically possible – in this case I get to make things very hot, very quickly, with a cleverly-engineered beam of single-frequency light.

I get to work with like-minded people within Dstl, academia and industry, and I really believe that we are, by researching the subject, making the world a better and safer place.

Every day at Dstl is different, there is very rarely a boring day, I love problem solving and I enjoy my work, which I think very few people get to say.

Did I mention that I get to burn stuff with a big laser?

I have a very demanding daughter at home and Dstl have gone out of their way to let me know she comes first. I get to spend time pushing my daughter on a swing, so what’s really not to like about that work-life balance?

Next step for laser science

Dr Kendall is looking forward to seeing his work in action. Once the science has been fully determined, the first laser weapons will undergo user testing on a number of Royal Navy and British Army platforms.