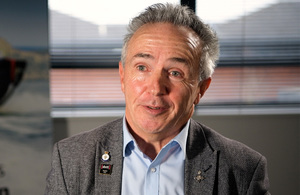 It is almost 40 years since the ship Alasdair Gilchrist was aboard sank after being hit by an anti-ship missile during the Falklands conflict.

Four decades on he brings his experience and expertise to bear at the Defence, Science and Technology Laboratory (Dstl) by making the lives of those serving at sea safer.

As Above Water Systems Programme Manager he has pioneered work in artificial intelligence (AI) and machine learning, autonomy in uncrewed vessels, and threat detection.

Alasdair, who has been made an MBE, said:

I survived HMS Sheffield sinking on the 4th of May 1982. It was quite personal. I lost 20 good friends and had some mental issues after that – post traumatic stress.

To come through that you need to be able to use it as a positive emotion to affect change for good. Saving sailors’ lives is what we do and I’m very proud of that.

The People Inside: Alisdair Gilchrist

Alasdair joined the Royal Navy 45 years ago and was tasked with the most menial jobs on the ship but now he is helping shape the future of naval warfare.

I joined the Navy in 1977 as a young junior seaman operator – mainly scrubbing decks and cleaning toilets at the age of 16, but learning from the bottom up which was just a wonderful experience. They sent me around the world.

He served with the Royal Navy for 28 years. He has worked at Dstl more than 16 years and recently been involved in projects such as the uncrewed vessel MAST-13 and exercise Formidable Shield.

Alasdair – who is known as Gilly – said:

My role is predominantly looking after the science and technology advancement of the Royal Navy’s technical goals on its major warships.

The exciting thing is to see the technology go on to the ships. We just can’t sit on our laurels.

Technology is going at a pace and we just have to keep up with it – and shape it for good.