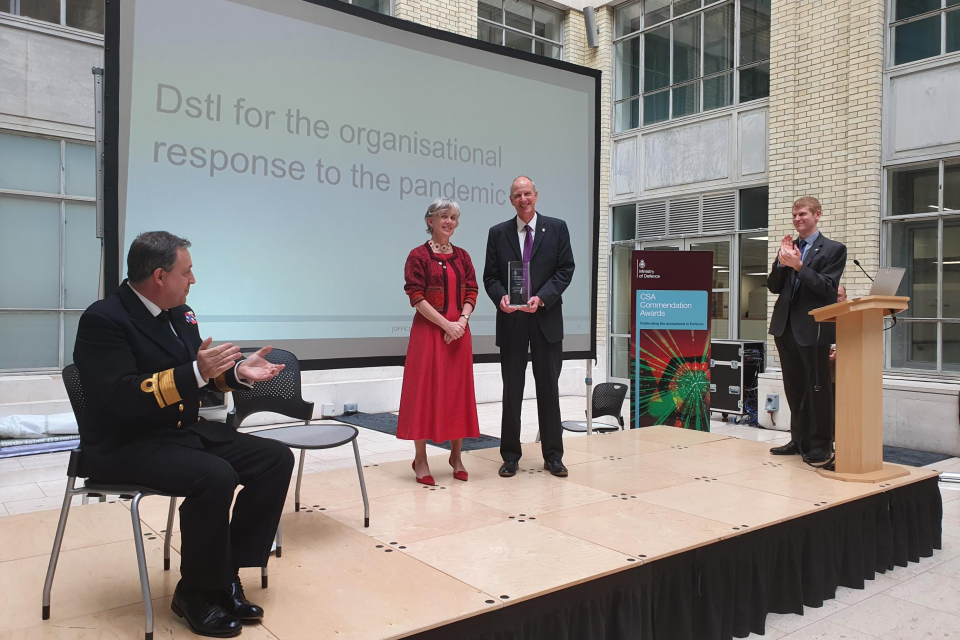 The Ministry of Defence’s (MOD) Chief Scientific Advisor (CSA) Professor Dame Angela McLean has awarded the latest CSA Commendations at a special ceremony which took place at the MOD’s headquarters, in London.

The awards recognise exceptional contributions made by individuals and teams working in science and engineering across defence.

While there were numerous awards across the MOD, the Defence Science and Technology Laboratory (Dstl) was presented a significant number of awards for 2020 and 2021, with a special Organisational Award recognising hundreds of individuals across Dstl who had been involved in supporting the COVID-19 pandemic effort.

Colleagues provided support to defence, the health services, and partners across government who sought out Dstl’s scientific expertise and advice to lead and help combat coronavirus and protect the health of UK citizens.

I’m so proud that Dstl’s support has been recognised in this way. Dstl’s scientific excellence helped to maintain defence outputs, support the nation’s health response and the government’s decision-making, as well as increase the fundamental scientific understanding of the virus itself.

More than 350 scientists worked specifically on a wide variety of projects to support the fight against COVID-19, from home, on-site, or deployed into partner organisations across the UK.

I’m delighted to see Dstl so well represented at the CSA awards both this year and last year. I was particularly pleased that Dstl’s many important contributions to the COVID response were recognised. It was my own personal experience that their work was essential.

There were a number of individual presentations including to Dstl’s Sally Davies who received an award for her work in diversity and inclusion, and Dstl’s Jim Maltby for his work in communicating science and engineering.

Sally’s citation highlighted how she worked tirelessly with others to create a diverse and inclusive environment and remains determined to make change happen, remaining professional and committed to the cause of acceptance for all.

Jim initiated and led the delivery of the Virtual Reality Museum of the Future and other tools, from having the bright idea in the first place, to working closely with industrial partners and games designers to make it a reality.

Find out more about Dstl and our science and technology capabilities, as well as opportunities to join our outstanding workforce.