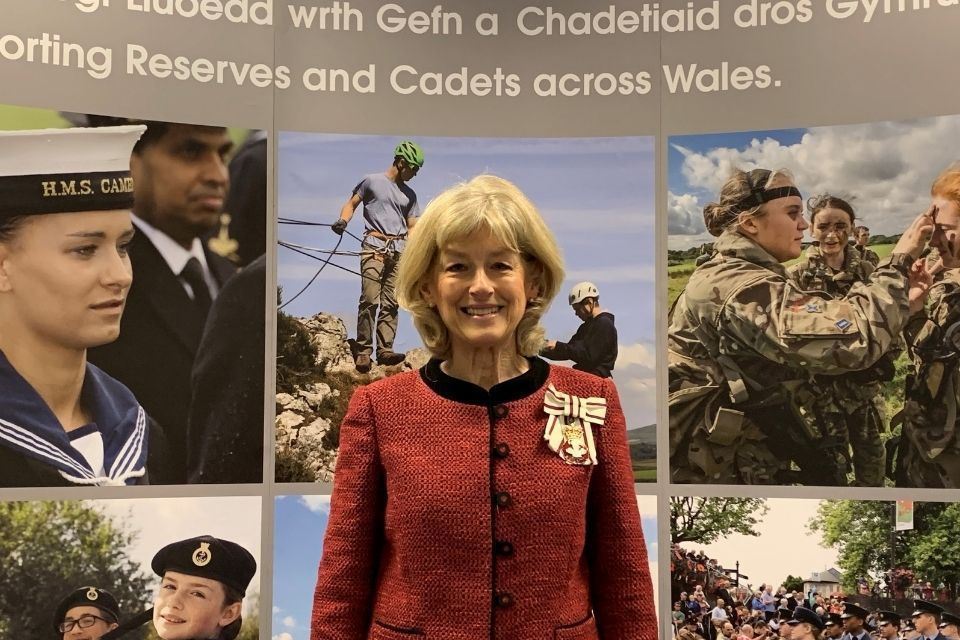 The role, which lasts for a year, includes attendance with Mrs Meredith, who acts as the Queen’s representative, at a number of official engagements such as remembrance events, royal visits and parades.

The Cadet Forces are amazing organisations, where the mixture of military training, youth work, civilian qualifications and community work helps develop our young people ready to take their place in society.

She added that the Cadet Forces would not operate but for the superb dedication and commitment of the officers and adult volunteers who give up their free time for the organisations.

Thank you for the encouragement and care that you show our young people in particular in these challenging times. I would like to pay tribute to the ingenuity of adult volunteers who have grasped technology with enthusiasm to develop on line training so successfully

Leading Cadet Neil, from Cardiff, who aspires to join the Royal Navy, has a talent for waterborne activities and has achieved the highest qualification open to cadets in boating disciplines and hopes to become an instructor in all waterborne proficiencies.

Leading Cadet Robinson, also from Cardiff, has been a member of Fitzalan School Combined Cadet Force since its formation in 2017, and has consistently demonstrated courage both in his personal life and when sailing.

The two will follow in the footsteps of Cadet Warrant Officer Thomas John of No.1 Welsh Wing RAF Air Cadets and Leading Cadet Katrina Paterson of Cardiff Sea Cadet Corps, who were presented with Lord-Lieutenant’s Cadet Certificate and Badge for 2021.

Seven people were recognised for their outstanding service and devotion to duty and awarded the Lord-Lieutenant’s Certificate of Merit.

Corporal David Wheeler from Cardiff, who works as a brass peripatetic teacher, is an outstanding musician and skilled performer on French and Tenor Horn. He has represented the Army at Mametz Wood, on the Somme and at Passchendaele.

Facilities Manager at RFCA for Wales Mrs Lesley Williams joined the association nearly 30 years ago. Her work covers a myriad of responsibilities from waste management and disposals contracts to procurement and management of RFCA vehicles. She is always methodical, accurate and never accepts second best.

Admin Officer Mrs Nicola Talbot who joined the Association straight from school in 1994 is described as,

a bubbly character, always cheerful, full of laughter, positive, compassionate and caring. She approaches her work with enthusiasm and attention to detail. Nothing is ever too much trouble and she is always helpful and willing to fulfil duties that are not within her remit even outside working hours. Her application and dedication is a great asset to the organisation, which in turn greatly helps with the service that we deliver to the Reserves and Cadets.

Captain Amanda Brookes is the Cadet Shooting Advisor for 160 (Wales) Brigade and has been instrumental in raising the name of Dyfed and Glamorgan ACF in cadet shooting.

Corporal Steven Dodd has helped reverse cadet losses and boost numbers at 2,300 St Athan Squadron to well over 40 cadets, while Squadron Leader Jason Horton of 372 Barry Squadron is described as an outstanding officer. Mr Jason Hooper has transformed the committee at 1,148 Penarth Squadron and is always prepared to go the extra mile for the benefit of the cadets.

There are nearly 5,000 Cadets in Wales who gain skills and qualifications through working with local communities, charities and taking part in a variety of practical activities. The cadet syllabus is delivered by 1,500 volunteering adult Instructors and civilian assistants, who give up their spare time on weeknights and weekends.

The virtual awards event was organised and broadcast by the Reserve Forces’ and Cadets’ Association (RFCA) for Wales – an organisation that has supported the Armed Forces for over 100 years.