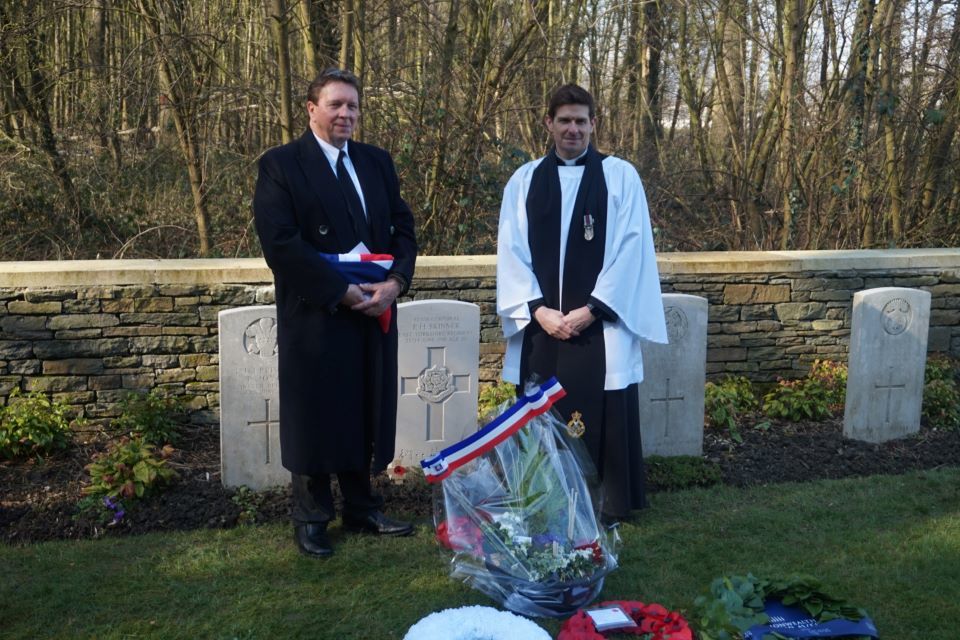 On Thursday 10 March, the grave of Corporal (Cpl) Frederick Herbert Skinner of 11th Battalion, East Yorkshire Regiment, was rededicated in northern France. The rededication service took place at the Commonwealth War Graves Commission’s (CWGC) Nieppe-Bois (Rue-du-Bois) British Cemetery and was attended by his family having travelled from Bermuda.

The service was organised by the MOD’s Joint Casualty and Compassionate Centre (JCCC), also known as the ‘MOD War Detectives’, and was supported by serving soldiers of The Yorkshire Regiment and The Royal Welsh.

Rosie Barron from MOD JCCC and who led on the case adjudication, said:    “It is always a privilege to organise rededication services for previously missing soldiers and to see how much it still means to their family that their relative has been found. Although now more than 100 years after their deaths, it is important that men like Cpl Skinner are remembered, and their sacrifices are not forgotten.”

Cpl Skinner’s great nephew, Kevin Knights, originally from Ipswich and travelled from his home in Bermuda to attend the rededication service, said:

“We would like to say a huge thank you to the CWGC, MOD War Detectives, and all of those who helped to identify Frederick’s final resting place. Also, to all those who arranged and participated in the rededication to make this such a special day.

“He had no known grave for over 100 years, so it was an incredible experience when we discovered that he had been found. It was an immense privilege to join with others to pay respect, give thanks for his sacrifice and witness the farewell he so richly deserved. His grave can now be visited by members of our family to ensure he is never forgotten.”

The final resting place of Cpl Skinner came to light after a researcher submitted evidence to CWGC suggesting that the man buried in the grave was likely to be him. After further research by CWGC, the National Army Museum and MOD JCCC, it was confirmed by MOD JCCC following completion of their adjudication process that this was indeed his final resting place.

The service was conducted by the Reverend Ben Norton CF, Chaplain to 4th Battalion The Yorkshire Regiment.

The Reverend Norton said:     “To be able to lead the rededication service for Corporal Frederick Herbert Skinner is a humbling honour.

“Corporal Skinner gave his life for love, hope and to see peace in the world. We today, as we lay him to rest and commend him to God continue his story by embracing these truths for ourselves and making sure that we continue his story in building a better world for the generations to come.”

Cpl Skinner was killed on 25 June 1918 aged 26 whilst in positions around Nieppe Bois, south east of Hazebrouck in France. He was buried in Nieppe Bois (Rue-du-Bois) British Cemetery, but the marker over his grave was damaged and the identity of the soldier in the grave could not be determined. As he was missing, Cpl Skinner was commemorated on the Ploegsteert Memorial.

The headstone over the grave has been replaced by the CWGC.     Liz Woodfield, CWGC Director of External Relations said:

“The Commission is honoured to be able to support the rededication of Corporal Frederick Herbert Skinner’s grave in Nieppe-Bois (Rue-Du-Bois) British Cemetery, now marked with a headstone bearing his name. His family chose to reflect the sacrifice of this young man for his nation with the patriotic music of ‘Land of Hope and Glory’. This ceremony is an opportunity for us to renew our commitment to care for his grave and those of his comrades, in perpetuity.”