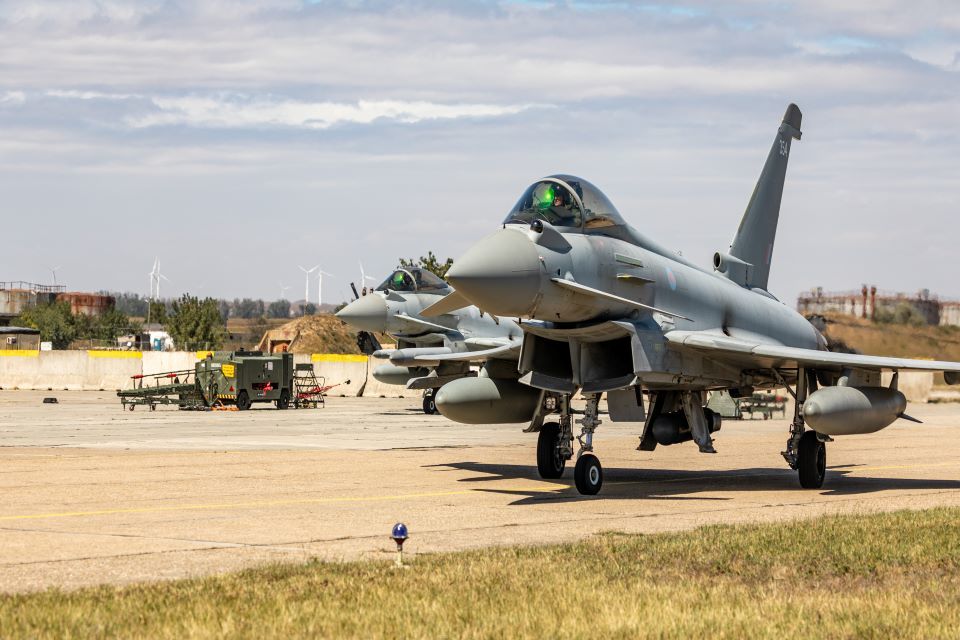 The 4 deploying Typhoon jets from 3 (Fighter) Squadron are normally based at RAF Coningsby, and will conduct the NATO Air Policing mission from Mihail Kogalniceanu Air Base on the Romanian Black Sea coast. The mission is supported by 150 RAF personnel based at RAF Wittering who form the Headquarters of an Expeditionary Air Wing (EAW). The personnel recently undertook training at RAF Leeming’s Operational Training Centre.

The UK remains committed to NATO and European security in the face of Russian aggression and the unprovoked invasion of Ukraine.

Operation Biloxi is a long-standing NATO mission and the Royal Air Force are playing a central role in security and deterrence in Europe.

Air policing is a purely defensive operation and a permanent NATO mission which began in 1961 during the Cold War. The mission ensures the security and integrity of all NATO Alliance member’s airspaces. Airspace is monitored by operations centres and where it is assessed that an interception is required, NATO aircraft can be scrambled as part of a Quick Reaction Alert. The UK supports Romania by augmenting its own capabilities.

The RAF deployment to Romania has been supported by personnel from No 1 Expeditionary Logistics Squadron and No 2 Mechanical Transport Squadron, part of the RAF Support Force formed in 2020. Both squadrons have prepared and transported equipment and supplies to maintain and sustain the Typhoon jets during the mission.

The arrival of our personnel and equipment in the region highlights the RAF’s continued commitment and contribution to the NATO Air Policing mission in Romania.

During the deployment, we will be working alongside our Romanian and other NATO partners, enabling the delivery of the mission and protecting and reassuring our allies, whilst building confidence and maintaining deterrence.

Operation Biloxi is the British name for the NATO Air Policing mission – it is the fourth time since 2017 that the RAF have conducted it. The NATO mission enhances the national air policing conducted by the Romanian Air Force and will see the RAF Typhoons mirror the Quick Reaction Alert mission that is conducted routinely in the UK.

This deployment is in addition to long-standing continuous missions undertaken by NATO Allies across the Eastern Flank.