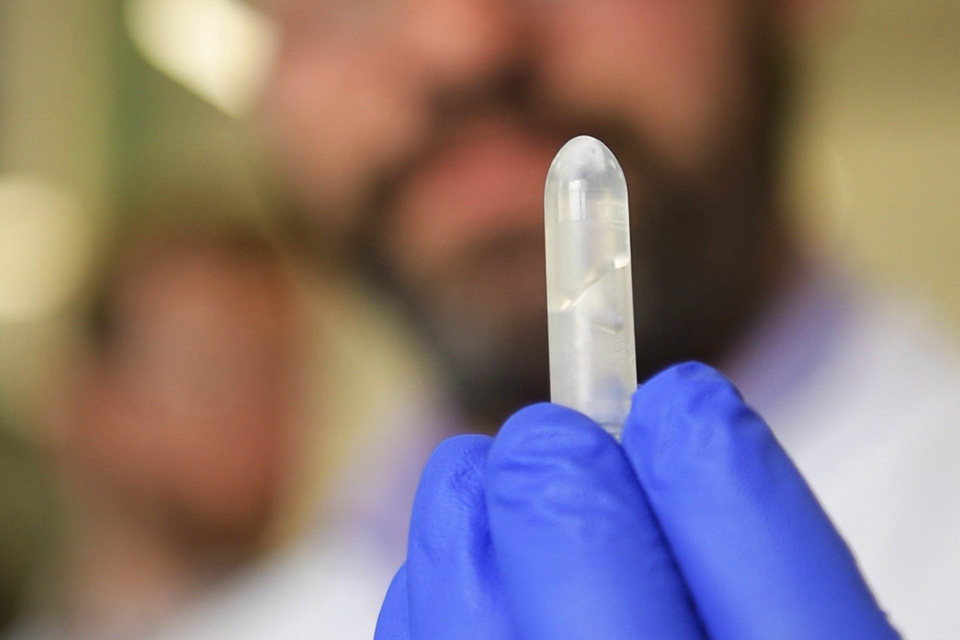 Defence Science and Technology Laboratory (Dstl) scientists are working on bio-batteries powered by deoxyribonucleic acid (DNA) which could ‘change the world and change the way we do things’.

The pioneering work is a collaborative project with Touchlight Genetics, the Office of Naval Research Global (ONRG) from the US Department of Defense, and the University of Utah.

One of things that is really clear is that power and batteries is a big need for defence, to have alternatives.

The current battery technology that our soldiers are using is containing a lot of energy in chemical format and if that battery gets shot for example it’s going to explode and burst into flames.

Our bio-battery is made out of DNA, enzymes, lactate and water. If you shot it it would just go splat so there’s a significant safety benefit.

She went on to say that this idea was scalable and could take the form of large batteries, batteries too small to see or a completely new format such as a coating.

Bio-Batteries: The Power of DNA

The concept behind the batteries is to use naturally occurring products such as lactate.

This is then degraded using enzymes, which release electrons, which are then captured and can be used as power.

For defence our warfighters continue to carry more and more electronics that require the power and that means carrying batteries with them.

These batteries might provide a solution, a greener solution to generating power.

It feels absolutely fantastic to be involved in these types of projects. The impact for defence as well as for society at large will be multi-fold.

It’s really interesting to occasionally, step back and see where it’s going to go.

It has applications in so many areas potentially that it’s sort of exciting to think about.

He added that it could be “dried down” and reconstituted when needed.

You have an incredibly energy-dense battery that can be carried very portably. It’s very light and you can reconstitute it anywhere: seawater, freshwater. So you can carry it on ships; you can carry it in disaster areas.

He added that Touchlight is unique in the scale, speed and quality of DNA it produces.

The project, which started in 2017, is being funded by Dstl and ONRG. Touchlight Genetics are undertaking the work to produce the DNA at scale while the University of Utah are working on the enzyme optimisation and cascade evolution.

It’s vital in this day and age that the army considers sustainability and its impact on the environment.

This is the type of project that offers the military amazing benefits. It will save lives. It is the sort of technology defence needs.