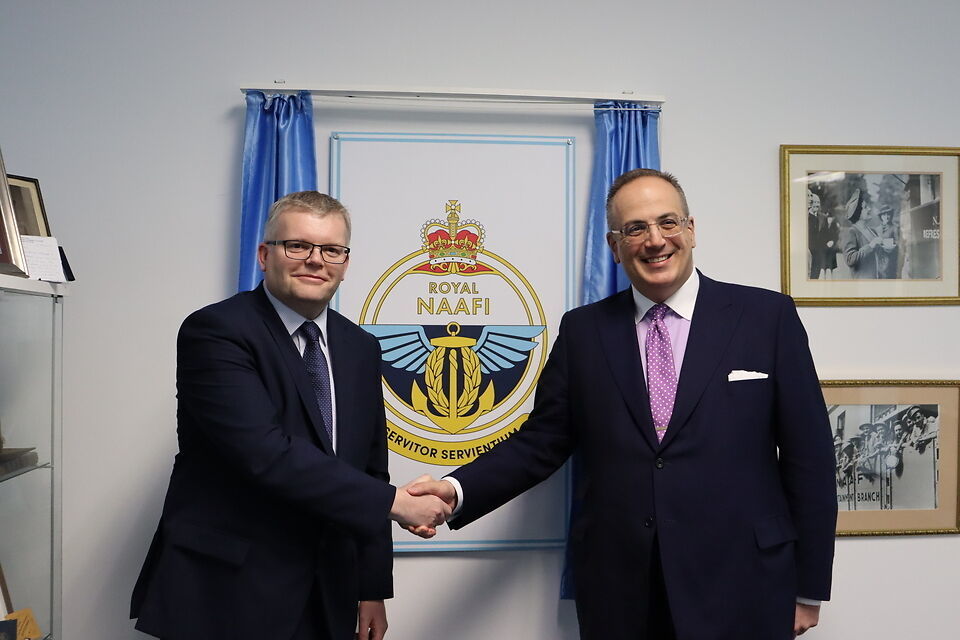 The organisation was established in 1920 when the then Secretary of State for War, Winston Churchill, set up a committee to oversee organisation of the armed forces’ canteens following World War 1.

Since 1920, the NAAFI has provided leisure, catering and recreational services for members of the armed forces stationed across the world. Since then, NAAFI has established an outstanding national reputation including in their support for troops during the Second World War, deployments in Northern Ireland and the Falkland Islands, as well as both Gulf Wars and more recently the Balkans, Iraq and Afghanistan. They continue to serve UK forces based overseas in Germany, Brunei, Gibraltar, the Falkland Islands, Ascension and on Her Majesty’s Ships.

The NAAFI has played a vital part in supporting our armed forces for more than 100 years, throughout a number of overseas conflicts.

Receiving the Royal title is a truly significant honour and it clearly demonstrates how seriously this country takes NAAFI’s continued support for those who have served and continue to serve this country.

The title ‘Royal’ is very sparingly granted and those who receive the honour must be able to show a genuine royal connection as well as evidence of a close personal interest between members of the Royal Family and the organisation in order to qualify for the prestigious title.

King George VI was the NAAFI’s original patron until his death in 1952 at which point Her Majesty The Queen took over the role. The organisation also provided service onboard the Royal Yacht Britannia throughout its commission.

We are truly thankful to receive the Royal title and we aim to repay this honour by continuing our excellent support to our Armed Forces as we begin our second century of operation.

Everyone within NAAFI will take pride in this recognition and it will act as a timely boost to all our employees and loyal customers as they serve across the world today.

All profits are reinvested back into the Armed Forces either through welfare contributions, investment in facilities or into the NAAFI Fund, which will provide at least £1m of funding to serving armed forces personnel and their families in the form of grants for welfare projects every year. During 2021, the organisation provided 95 grants worth £1.2m.

As recipients of the Ministry of Defence Employer Recognition Scheme Silver award, NAAFI demonstrates strong support to the armed forces community and aligns their values with the Armed Forces Covenant.

I am delighted that NAAFI has been granted the title Royal NAAFI. This is a great honour, particularly at the end of the NAAFI’s centenary year, and recognises their broader service to our Armed Forces.

The sacrifices made by NAAFI employees in their endeavours to serve those that serve are highly valued by Defence, and it is wonderful to see this recognition.