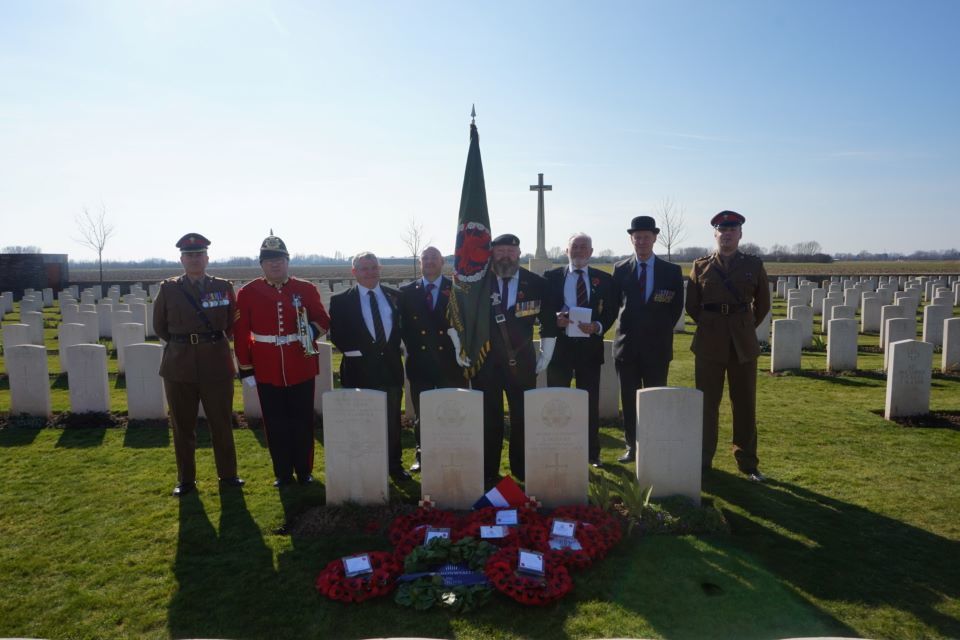 A combined investigation has enabled the graves of Second Lieutenant (2Lt) Sam Hughes and Company Serjeant Major (CSM) David Jones DCM, both 10th Battalion The Welsh Regiment, to be rededicated nearly 105 years after their deaths. Their new headstones, which now bear their names, were the centre piece of a rededication service that was held at the Commonwealth War Graves Commission’s (CWGC) Pont-du-Hem Military Cemetery, in northern France on Thursday 10 March.

The service was organised by the MOD’s Joint Casualty and Compassionate Centre (JCCC), also known as the ‘MOD War Detectives’.

The final resting place of 2Lt Hughes was identified after evidence collated by researcher Steve John and was submitted to the CWGC. Further research by the National Army Museum and MOD’s JCCC led to the location of 2Lt Hughes’s grave being confirmed. Whilst investigating the case, Rosie Barron a caseworker within MOD JCCC, confirmed the adjacent grave must belong to CSM Jones.

Rosie Barron, JCCC said:    “It has been a privilege to organise this rededication service for 2Lt Hughes and CSM Jones. These men died on the same day and are likely to have known each other well. It seems fitting that we now know they lie next to each other in Pont-du-Hem Military Cemetery and that we have been able to honour their memories today in the presence of their regimental family.”

The Reverend Norton said:     “To be able to lead the rededication services for Second Lieutenant Sam Hughes and Company Serjeant Major David Jones DCM from The Welsh Regiment is a tremendous honour. Reading their names and hearing their stories brings home to me personally their stoic courage and love for their fellow men.

“We walk in their footsteps and embrace the light of hope that they have passed to us through their sacrifice. We hold them in our prayers as we commend them to God.”

2Lt Hughes and CSM Jones, were killed during trench raids in the La Boutillerie Subsector, south of Armentières in France, on 6 November 1917. They were recovered and buried by the Germans in Beaucamps Communal Cemetery German Extension. After the war, their remains were moved into Pont-du-Hem Military Cemetery and the two men were buried next to each other. As their identities were unknown, their names were recorded on the Ploegsteert Memorial.

In October 1917 CSM Jones had been awarded the Distinguished Conduct Medal (DCM). The citation for his medal published in the London Gazette read:

“For conspicuous gallantry and devotion to duty during an attack. Reorganising part of his company, which had become detached, he led them forward and regained touch with the main body, and afterwards with four privates he attacked and captured an enemy strong point and killed the garrison. He showed fine qualities of resource and initiative.”

Sadly, CSM Jones did not live to receive the medal, which was instead presented to his parents following his death.

The headstones over their graves have been replaced by the CWGC.    Xavier Puppinck, CWGC Area Director for France said:

“We are grateful to the dedicated researcher who submitted the case for the identification of Second Lieutenant Hughes. We were delighted when the MOD JCCC was able to expand their investigation to the adjoining grave, which has now been established as that of Company Serjeant Major Jones. Commemorated on a Memorial to the Missing for almost 100 years, their graves can now be marked by CWGC headstones bearing their names.”