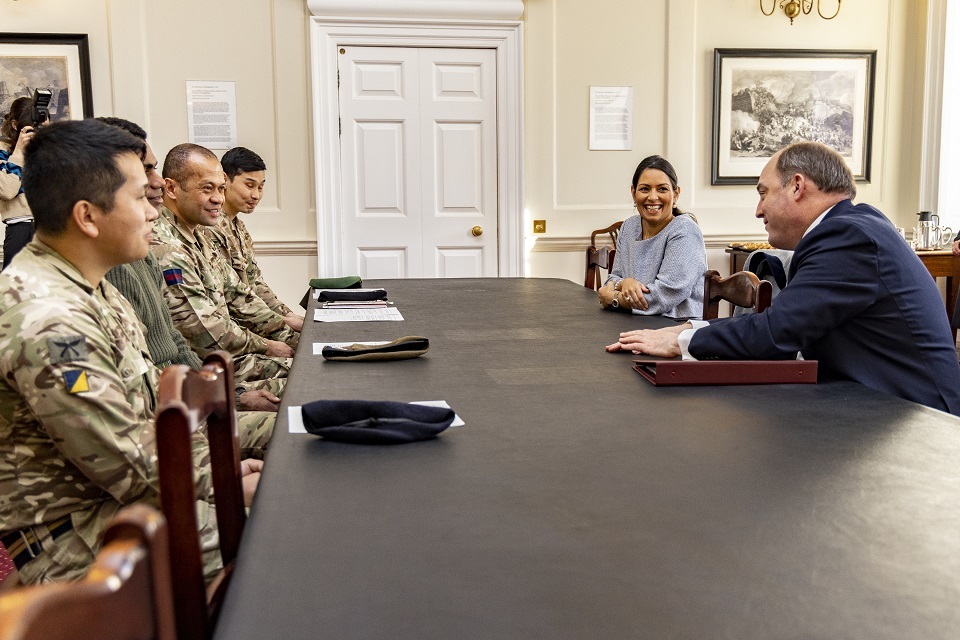 At present, all non-UK personnel leaving service who wish to settle in the UK have to pay the full fee of £2,389 for indefinite leave. This fee will now be waived for those with at least six years’ service or who are discharged due to an illness or injury attributable to their service.

The fee waiver will also apply to eligible veterans currently living in the UK who have not regularised their immigration status.

Currently there are over 9,000 non-UK citizens serving in the UK armed forces from countries around the world including Australia, Canada, Fiji, Ghana, India, Jamaica, Nepal, New Zealand, Nigeria, St Lucia and South Africa, many of whom may consider applying for indefinite leave to remain in the UK when their service ends.

The Defence Secretary Ben Wallace and Home Secretary Priti Patel made the announcement while visiting personnel set to benefit from the change at London District, the headquarters of British Army units in London.

Last year we sought views from non-UK personnel about how we can best support and recognise their incredible contribution to the UK Armed Forces. I am delighted to announce that eligible personnel and veterans who have served for a period of six years or more, and wish to settle in the UK, will no longer have to pay the visa fee.

It is only right that we have taken this important step to express our sincere gratitude to the brave men and women from outside of the UK who have made such a valuable contribution to the defence of this country.

Today, it was a pleasure to meet personnel who will benefit from this change. I wish them all the best for the future.

There are thousands of brave men and women across the Commonwealth who have served our country with distinction in the military over the years.

Waiving the visa fee for those Commonwealth veterans and Gurkhas with six years’ service who want to settle here is a suitable way of acknowledging their personal contribution and service to our nation.

This is a significant step towards improving the process for eligible non-UK citizens serving in our Armed Forces in attaining settlement.

The Ministry of Defence and the Home Office work closely with non-UK citizens who serve in the UK Armed Forces to ensure they are fully aware of the support available to them and their families to settle in the UK. The new policy will improve this support even further.

It is expected the new policy will come into effect this Spring.

The Government’s response to the public consultation can be found here.