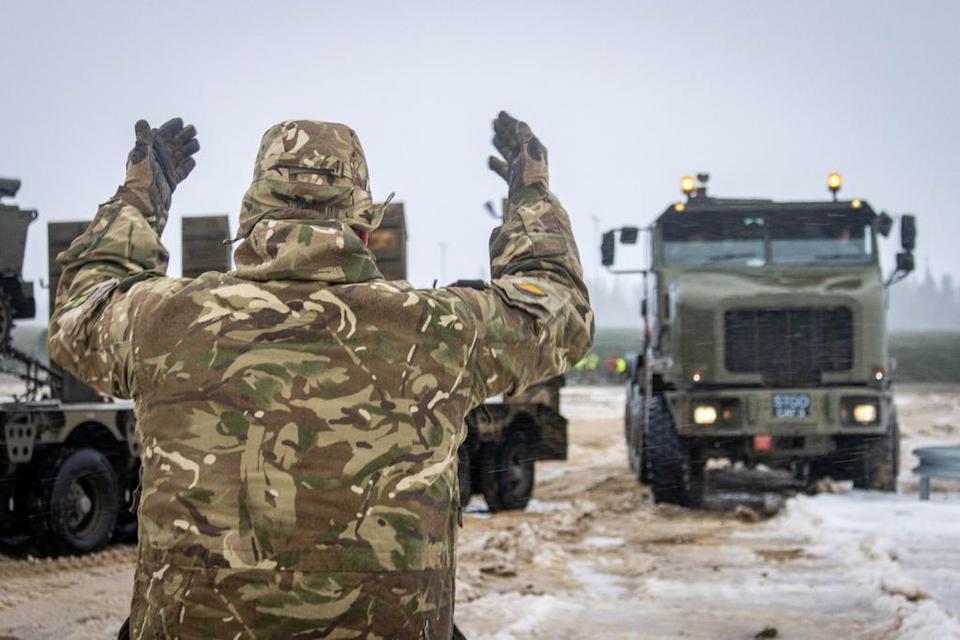 HMS Trent is in the eastern Mediterranean, conducting NATO exercises with Merlin Helicopters and RAF P8 Poseidon Maritime Patrol Aircraft. They will be shortly joined by HMS Diamond, a Type 45 destroyer, which set sail from Portsmouth yesterday.

Challenger 2 tanks and armoured vehicles of the Royal Welsh battlegroup have arrived in Estonia from Germany, with further equipment and around 1000 troops arriving over the coming days. This will lead to a doubling of the UK presence in Estonia, where the UK leads a NATO battlegroup as part of the Alliance’s enhanced Forward Presence.

RAF Typhoon fighter jets have already completed their first air policing missions across the region, with an additional four aircraft based at RAF Akrotiri in Cyprus. Typhoons flying from bases in Cyprus and the UK are now patrolling NATO airspace over Romania and Poland alongside NATO allies with Voyager air-to-air refuelling aircraft in support.

“Our armed forces are once again being called upon in the service of our Nation and I salute the bravery and sense of duty shared by all our personnel who have been deployed to support NATO.

“Alongside our NATO Allies, these deployments constitute a credible deterrent to stop Russian aggression threatening the territorial sovereignty of member states.”

Yesterday, the Defence Secretary held a virtual donor conference with more than 25 countries, including the US and Canada and some countries outside NATO, coordinating their support to Ukraine. They will continue to give humanitarian and military support, which includes ammunition and anti-tank weapons, and the UK has offered to conduct logistics operations to support the delivery of donations.

NATO Allies are united in response to Russia’s unprovoked invasion of Ukraine and are collectively taking a range of measures to protect their security and deter further aggression. At a meeting of NATO Heads of State and government yesterday (25 February), all 30 member nations agreed that:

“We will make all deployments necessary to ensure strong and credible deterrence and defence across the Alliance, now and in the future. Our measures are and remain preventive, proportionate and non-escalatory.”