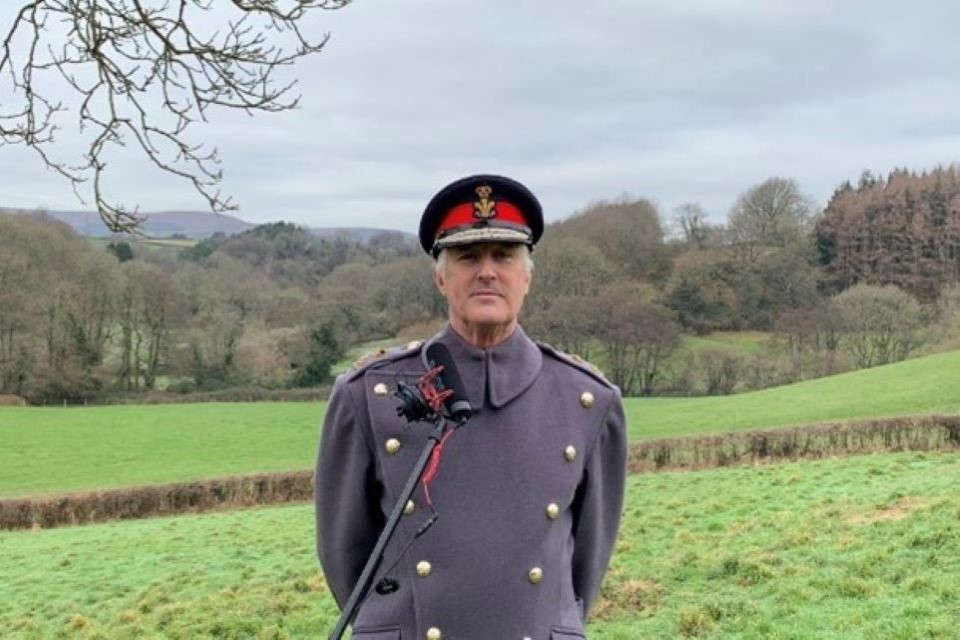 Brigadier Aitken praised his outgoing cadets for being able to speak fearlessly and confidently to all manner of people not just about themselves but about their cadet organisations.

Last year’s Lord-Lieutenant cadets were not only able to come and support me on official events such as royal visits and medal presentations but were also able to be ambassadors for their own organisations by engaging in conversation people ranging from ordinary members of the public to mayors, MP’s and MS’s. Well done and thank you.

Brigadier Aitken congratulated his new cadets on their appointment and told them they had been selected for the role as they were among the ‘best in their cadet organisations.’
Speaking at his awards ceremony held on Thursday 10 February, the Brigadier also praised the work of the Reserve Forces for their efforts over the last year.

For the Reserves Forces throughout Gwent and throughout Wales it’s been another busy year, with the regular armed forces having been busily deployed in this increasingly unstable world in which we live. Members of the Reserve Forces have either been serving side by side with the regular counterparts or have been backfilling them so that they themselves are able to go out and be deployed on operations. And of course covid has been a continuous backdrop to all of this with members of the Reserve Forces taking an active part in combating this ridiculous disease that is blighting our lives so much.

The role, which lasts for a year, includes attendance with the Brigadier, who acts as the Queen’s representative, at a number of official engagements such as Remembrance events, Royal visits and parades.
Able Cadet Kaitlyn Summerhayes from Newport is driven to be the best cadet she can be and encourages others to do the same. Staff Cadet Sergeant Jake Thomas from Tredegar joined as a twelve-year-old with his love of military music being evident from the beginning.

While on summer camp Cadet Sergeant Hamish Nicholl showed his calibre by assisting another cadet who was suffering a medical episode ensuring she was receiving the care needed.

Cadet Flight Sergeant Iestyn Jones from Cwmbran is a model non-commissioned officer who leads, inspires and motivates all who meet him.

Cadet Sergeant William Cocking of Newport is a committed and motivated cadet who has been active at squadron, wing and regional level in multiple areas of cadet life. Outside of cadets he raised £1,161 for St David’s Hospice Care by walking 26 miles in one day.

Cadet Sergeant Hayley Gabica of Newport showed great commitment by not only continuing to parade virtually during lockdown, but also by delivering lessons and presentations to keep the junior cadets enthused.

Five people were recognised for their outstanding service and devotion to duty and awarded the Lord-Lieutenant’s Certificate of Merit.

Although a reservist, Lance Corporal Andrews’ first-rate musical ability led him to being selected to play in the British Army Brass Band. Captain Smith from Newport never lets anyone down and her focus is on ensuring that both adult volunteers and cadets have a fulfilled cadet experience and strive to achieve their dreams.

While volunteer treasurer of Newport Sea Cadets, Mrs Bowen from Newport was instrumental during lockdown in securing £100,000 of funding for renovation work to the unit building. Unfortunately, while the unit was being renovated it was hit by a devastating flood, undoing months of work and destroying vast amounts of equipment.

Undeterred, Mrs Bowen was instrumental in enabling the unit to ‘rise from the ashes’ through countless letters, emails and phone calls to source the support and equipment the unit needed to reopen.

Squadron Leader Lavender from Newport worked exceptionally hard during the pandemic to ensure his sector did not suffer unnecessarily during lockdown while Flight Lieutenant Clark from Abertillery transformed 2167 Tredegar Squadron, which was ear-marked for closure, into one of the strongest units in No 1 Welsh Wing within 18 months.

There are nearly 5,000 Cadets in Wales who gain skills and qualifications through working with local communities, charities and taking part in a variety of practical activities. The cadet syllabus is delivered by 1,500 volunteering adult Instructors and civilian assistants, who give up their spare time on weeknights and weekends.
The virtual awards event was organised and broadcast by the Reserve Forces’ and Cadets’ Association (RFCA) for Wales – an organisation that has supported the Armed Forces for over 100 years.