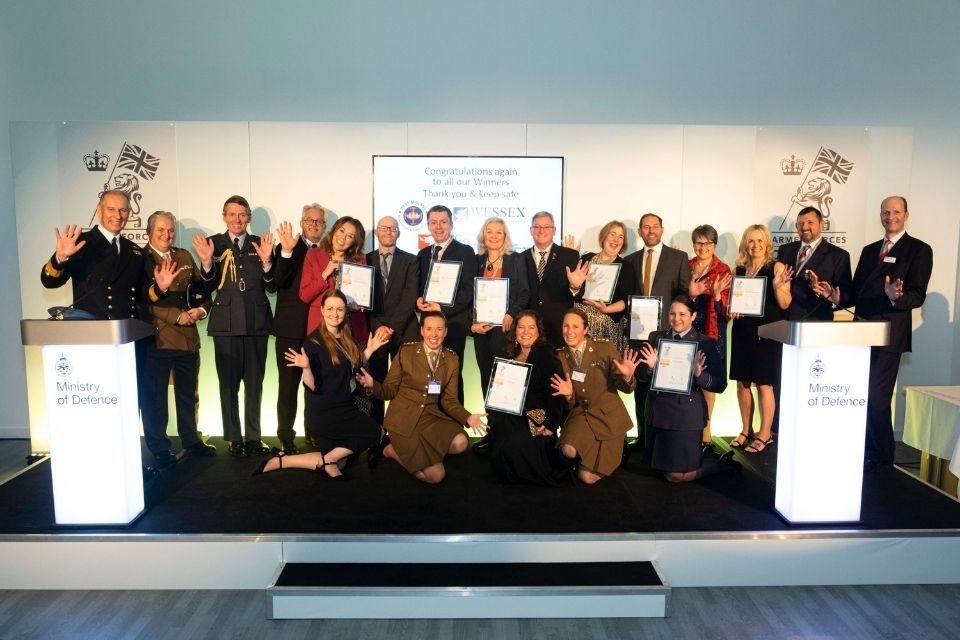 The joint regional event held on 17 November 2021 at HMS Cambria saw employers from Wales, West Midlands and Wessex recognised for the outstanding support they give to the armed forces community.
Nationally, 140 organisations received the award.

Recipients from Wales were:

In addition, there were 15 winners in the West Midlands area and 13 from the Wessex RFCA area.
Representing the highest badge of honour, Employer Recognition Scheme (ERS) Gold Awards are awarded to those that employ and support those who serve, veterans and their families.

This year’s awardees brings the total number of Gold holders to 493.

I would like to thank all the organisations who have proven their support for the Defence community during such unprecedented and challenging times.

The vast range of those recognised this year demonstrates how employing the armed forces community makes a truly positive and beneficial impact for all employers, regardless of size, sector or location.

To win an award, organisations must provide 10 extra paid days leave for Reservists and have supportive HR policies in place for veterans, Reserves, and Cadet Force Adult Volunteers, as well as spouses and partners of those serving in the armed forces.

This year, organisations include NHS trusts, educational institutions, financial services, hotels, charities, law firms, police services, football clubs and museums. Nearly 50% are a small or medium-sized enterprise and 72% are private companies, demonstrating the wide range of organisations offering support to the military community regardless of size, sector or location.

The evening began with a performance from the Royal Marines Band in a sunset ceremony. Guests were then welcomed by the Chief Executive of the RFCA for Wales Colonel Dominic Morgan OBE who introduced the Chief of Defence People Lieutenant General James Swift OBE, who gave the opening address.

We’re delighted to be recognised as a Gold-standard employer in this year’s awards. As a uniformed service, we’re immensely proud of our strong links with the military, both regular and reservists, as well as their families.

The military were critical in supporting our ambulance service during one of the most challenging periods in its history. Service personnel helped crew our ambulances and make them ready for use during the pandemic, so we’re keen to ensure we reciprocate that fantastic commitment with strong support for the armed forces covenant through recruitment and support of veterans, reservists and their families.

We’re delighted that so many employers in Wales have been recognised with this Gold Award. It is particularly pleasing that these employers have worked so hard to support our armed forces community, during what has been an extremely difficult year.

2021 is the first year that there has not been one national award ceremony. This is due to the high number of winners (140 in total). Instead regional ceremonies have been held in Edinburgh, London and Wales and Leeds.