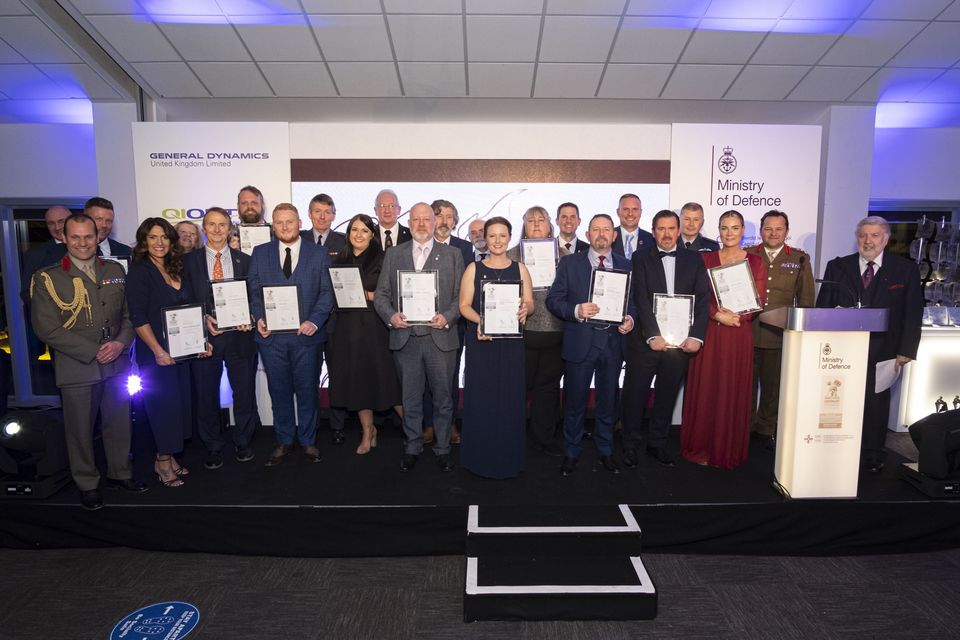 Outstanding achievers from across the Principality were also recognised at the event which took place at Cardiff City Stadium with Roy Noble OBE as Master of Ceremonies and special guest former Wales rugby captain Ryan Jones MBE.

The 24 organisations recognised for their support and commitment towards Defence and presented with the (ERS) Silver Award included:

The awards were presented jointly by:

Tonight is a night where we celebrate some fantastic achievements, across Defence, and also acknowledging the huge amount of support and work that takes place within and beyond the armed forces community.

These employers have been recognised for their exemplar support to the armed forces community. Defence relies on organisations like these to promote the armed forces covenant, which is a promise from the nation that our service men and women and their families are not disadvantaged as a result of the service that they give the country.

They have gone the extra mile to ensure that our armed forces community receive the best support and encouragement and we are very proud of the contribution that Wales is able to make to Defence because of this endorsement.

We’re thrilled to be the recipients of a Silver Employer Recognition Scheme (ERS) Award from the Ministry of Defence this year.

We want to be the employer of choice whatever your background, and we value the diverse skillsets that Armed Forces personnel bring to our business.

We are proud to support those with armed forces associations, enabling them to pursue a Reservist role, transition out of the Armed Forces, or work flexibly whilst their military spouse or partner is away.

At Transport for Wales we continue to support our armed forces community and are proud to have achieved silver status of the Employer Recognition Scheme. By signing the armed forces covenant, we acknowledge, understand and support those who have served in the armed forces or continue to do so in a Reservist capacity, their families or those who are Cadet Force Adult Volunteers, should be treated with fairness and respect in the community, society and the workplace.

Ten organisations from across Wales were also acknowledged after being presented with the ERS Gold Award at a ceremony at HMS CAMBRIA on 17 November 2021.

The overall winner of the armed forces in Wales Award was Corporal Caroline Arter of 203 (Welsh) Field Hospital, who as well as being an army reservist is a nurse practitioner for Wales Air Ambulance. She was presented with her award by the Secretary of State for Wales, the Rt Hon Simon Hart MP.

The Armed Forces Covenant Award was won by Mr Paul Bromwell, Founder of Valley Veterans. Paul founded Valley Veterans 13 years ago to provide veterans with a platform to socialise and seek advice. He uses Equine Therapy to help veterans with PTSD for whom he is a passionate advocate.

The Sports Award, presented by Ryan Jones, was won by Corporal Sian Williams of 1 Air Mobility Wing, RAF Brize Norton. Sian, who is a Welsh ruby international, joined the Royal Air Force in 2008.

And the Youth and Cadets Award was won by Cadet Warrant Officer Matthew Clark of RAF 1429 Squadron. Cadet Warrant Officer Clark suffered serious health issues at the age of 18 which left him paralysed with his RAF dream destroyed. He has fought back and now has an air traffic engineers apprenticeship.