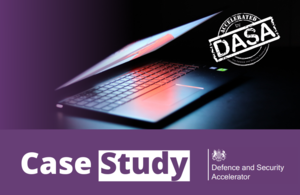 In an increasingly digital world, the demand for a more flexible workforce is growing; with more and more people choosing to work remotely. Although the benefits of a mobile workforce are well documented, it also presents many security risks. A key challenge faced by both industry and government employers is to find a way to facilitate a mobile workforce whilst maintaining control over security threats.

TriCIS, in partnership with Booz Allen Hamilton, received support from DASA to provide proof of concept of District Defend® software to Defence Digital for use within the within the Ministry of Defence. District Defend® is an advanced endpoint security system which automatically reconfigures security permissions based on the location of the device. It uses contextual triggers such as location and user behaviours to automatically adjust mobile devices, such as laptops and tablets to the appropriate security settings.

The project included a 90 day trial, during which the software was tested and scrutinised by a multidisciplinary team of experts from Defence Digital, Dstl and the British Army in three separate scenarios:

There was a positive ‘can-do’ approach that enabled three scenarios to be tested during the difficult COVID-19 lockdown period. All parties worked well together and DASA ensured this was a straightforward experience.

District Defend is a mature product which is already in use in the USA. TriCIS did not require funding for product development, but instead needed an introduction to UK Defence users and the opportunity to provide proof of concept. In this circumstance, DASA provided added value by bridging the gap between Science and Technology and Defence Equipment by facilitating a joint-funded project that could have otherwise fallen between the gaps.

Following the initial trials, the team have recognised a need to integrate the District Defend software with MOD hardware and systems for further testing.