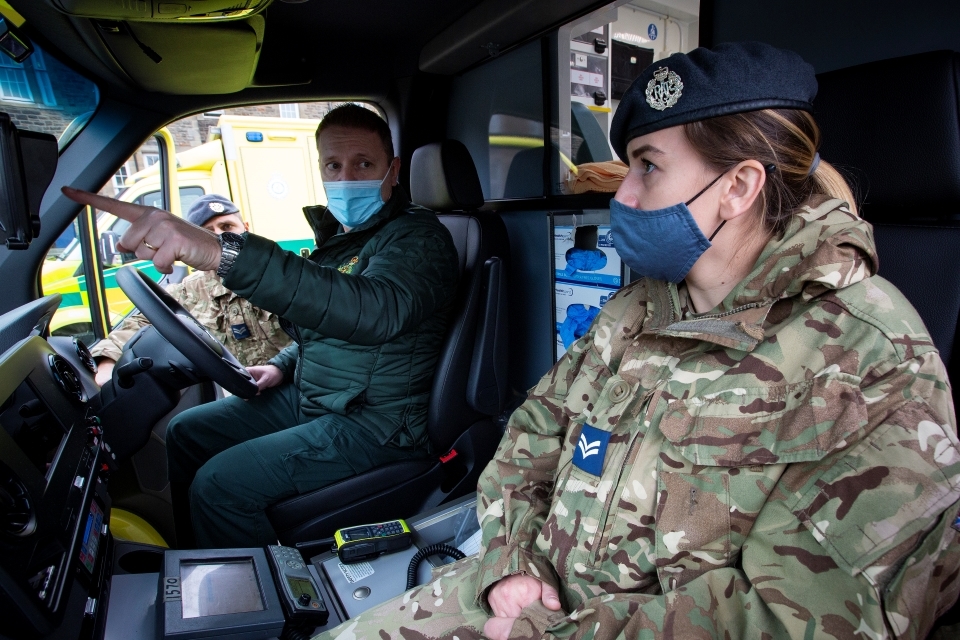 An extra 184 Armed Forces members have been made available to support the Welsh Ambulance Service NHS Trust (WAST), to increase the resilience of emergency responders during the winter period.

129 military personnel have been supporting the ambulance service in Wales since October and the latest uplift, due to begin on 4 January, will take the total number to 313. The task has also been extended until the end of March.

The servicemen and women, who have received thorough training, will augment the service with additional drivers. The task will help to ease pressures resulting from the pandemic and ensure the ambulance trust can continue to provide their essential service, including attending life-threatening calls.

Over the festive period our servicemen and women will continue to provide vital support to our dedicated emergency services across the UK to help keep communities safe.

The uplift of 184 extra personnel to support the ambulance service in Wales will ensure they can continue to provide life-saving services to those most in need.

The UK’s Armed Forces continue to play a key role in the fight against Covid-19 in Wales and I am hugely grateful for their commitment and expertise as they once again support the critical work of the Welsh Ambulance Service.

Throughout the pandemic, the military has stepped up in large numbers to support health services across Wales with the distribution of PPE, driving ambulances, assisting community testing and now the vaccine roll-out demonstrating the UK Government’s commitment to meet the needs of the whole of the United Kingdom.

We’re very grateful to have the continued support of the military who did a superb job of assisting us on two occasions previously. Having our Armed Forces colleagues will help us put more ambulances on duty so we can get to more patients, more quickly, while the extreme pressure continues.

The winter period is our busiest time and having military support will bolster our capacity and put us in the best possible position to provide a safe service to the people of Wales.

The latest uplift in military support comes after 98 personnel were made available to support the Covid-19 vaccine booster programme in Wales last week. Armed Forces will be working to support the Department of Health and Welsh Government to accelerate the vaccine rollout amid a wave of Omicron infections.

The personnel will make up 14 teams of vaccinators who will provide surge support to increase capacity. Those deploying are a mixture of health care professionals and general duties personnel who will be working in support of NHS Wales staff and volunteers, administering vaccines and providing planning expertise.

Personnel come from units across the three services – Royal Navy, British Army and Royal Air Force – and will deploy to all seven Health Boards in Wales, with two teams assigned to each board.

Some personnel have been active on other tasks in Wales since the pandemic began including community testing and PPE delivery.

There are now 411 personnel available to support on Operation Rescript tasks in Wales, the operational name given to Defence’s work to support the pandemic response across the UK.

Support is being provided through the Military Aid to the Civil Authorities (MACA) process. Since March 2020, Defence have responded to over 440 MACA requests across the UK.

The Armed Forces stand ready to step up and support civil authorities, devolved nations and communities as required in the coming months where the requests meet the MACA principles.