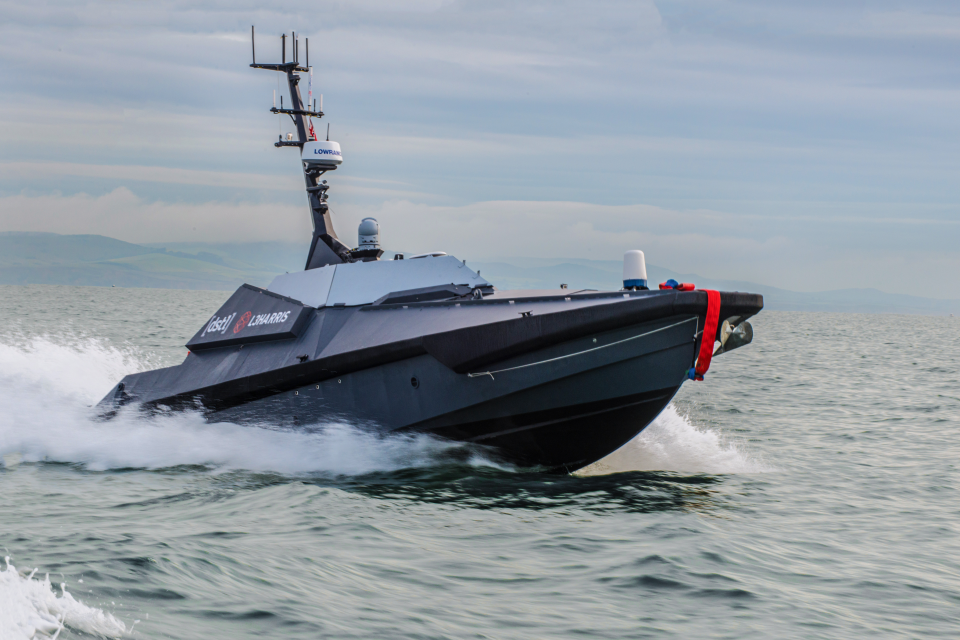 The Maritime Autonomy Surface Testbed (MAST) vessel is similar to a water-borne drone that can be partly or fully autonomously controlled to identify threats such as enemy ships or collect intelligence on targets while moving at high speeds.

This capability gives users the potential to deploy uncrewed missions that will help minimise the risk to service personnel by taking them out of harm’s way. It is also being trialled by Border Force to support operations to prevent uncontrolled crossings and save lives at sea.

The original MAST autonomy technology and algorithms were developed by L3Harris under contracts with Dstl for the Ministry of Defence (MOD), and was superseded by the MAST-13 design that was launched at DSEI in 2019. NavyX, the Royal Navy’s autonomy accelerator program, subsequently acquired a MAST-13 platform, MADFOX, which is currently being utilised for a range of test and evaluation trials.

At this week’s DSEI exhibition, a further licence brokered with Ploughshare’s assistance has been signed that covers the design of the MAST-13 platform. The agreement enables the autonomy system, associated hardware and vessel to be made available in configurations including an ‘off-the-shelf’ package suitable for use by a range of international organisations and commercial operators. It can be used as a testbed for experimentation and deployed in coastal security, port security, intelligence and threat detection.

Through collaborative development with Dstl and Ploughshare, we have a total package – a boat with intelligent autonomy, available for purchase and experimentation in a way that supports the international community’s scalable needs for coastal security.

We are leading the way in autonomous vessel technology and delivering integrated solutions to the Science and Technology community globally in a number of configurations, including a complete ‘off-the-shelf’ system designed from the bottom up to be a testbed offering an unprecedented opportunity to demonstrate, evaluate and exploit the potential of autonomy in maritime security.

The MAST project is a huge success story in which we are pleased to have played our part. It is a true demonstration of how a novel technology developed in conjunction with a government laboratory is supporting UK jobs, our economy, and the security of society.

A team that was just a handful of people working in a UK start up is now a successful business of more than 130 specialists. By bringing people to together, this cutting-edge technology now has the potential to secure our borders and protect people.

In partnership with L3Harris, Dstl is exploring Uncrewed Surface Vessel (USV) technologies. Dstl instigated the MAST project to design and build systems to facilitate the development, test and evaluation of USV technologies and tactics. This informs and educates the potential stakeholder community of the capability and potential of such systems, which should expedite the transition to operational exploitation.